So, last night I was at Rooftop Recording with Donn Deniston playing drums and it was tremendous! I had almost forgotten what it was like to play with a truly great drummer. The minute he started playing it was like the Bat Signal going up, lighting the dark clouds of my rock and roll soul, calling me to action. It was a full-on adrenaline rush! He played with such precision and intensity, and really helped bring out the dynamics and subtle nuances of each song. He just nailed it. Dave Roof really got the microphones and placement just right. He is an amazing engineer/producer/musician. The sound coming back through the monitors was better than I could have hoped for. I’m so excited by how this record is coming along. Thanks, guys! 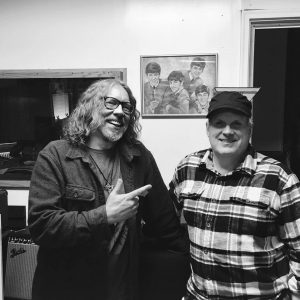