Mike Gentry still had so many songs to share. He just had to find the right time. Into his 50’s now, he remembers coming to The Ark’s Open Stage music event three years ago to test the waters. He felt ready to bring his songs to audiences as a solo singer with an acoustic guitar. But that was after several years away from the game, having been plugged into the rock scene in the 2000’s with the band Shining Farmer. But not too long after Shining Farmer’s debut album, Gentry developed a rare brain tumor that can affect coordination, sight, and cause weakness in the arms, presenting a real possibility of never again being able to play guitar.

Back at it with a solo album

“It’s still remarkable to me that I’m getting to do this,” Gentry said, looking back on what became a restored momentum and enthusiasm for performing around Michigan. “I mean, most people my age are old, ya know?” He lets out his infectious laugh, which is musical in its ebullience. Another reason he’s feeling exuberant is that July 10he’ll be on The Ark’s stage, accompanied by singer/songwriter Mike Vial, to celebrate his first album as a solo artist.

“I tried to make a really plainspoken, introspective, sentimental, low and slow kinda record,” said Gentry. “One that doesn’t overly demand your attention but allows your imagination a space to drift wherever it may go. It’s a record about loss and resilience, and about maintaining your sense of humor and optimism. I’ve always been really optimistic and a habitual bright-side-of-life kinda person.” He lets another of his signature chuckles go and it hangs in the air as he adds, “It’s a terrible habit.”

We all experience emotional highs in life (like falling in love, etc) that those enchantments may diminish as we grow up, but, as Gentry said, music is and always has been the one constant fascination, the charm, the high, the creative trance, that consistently leaves him shaking. He never sought a spotlight, he was never a virtuosic guitar player and it wasn’t until college that he refined his singing voice, and yet he couldn’t stop writing songs. It’s all about emotional content, for Gentry. “Allow the songs to just get the best of you and hope that the sounds you’re making” are relatable for an audience.

Gentry’s music is essentially an artful depiction of the human experience, yours as well as his own. “It’s about trying to get your life out in songs,” said Gentry. “I love performing, but I love people, probably most of all. I like to hear people’s stories. I want to hear what their trip is. I don’t care if people say: ‘Oh, yeah, that Mike Gentry guy is cool…’ No, what I’m trying to do, most of all, is create interactions, so that when they leave (from a show) they feel like they were a really good version of themselves during our time together. That’s what’s most satisfying to me about performing.” He stops again for a quick chuckle. “I talk a lot, live…”

Gentry creates a harmony in the rooms where he performs, not necessarily musically (since he’s solo,) but interpersonally. “I love to see people enjoying their lives,” said Gentry, often working to achieve that result from his position on a stage, with a guitar, and with a melodic arrangement of poetry. “We probably need music and art more than ever, cuz life is hard, man! And so people can come and not have to think about that for a minute, or four minutes. I don’t understand how it works, but I’m always amazed that it does.”

Gentry’s self-titled album was recorded with David Roof of Rooftop Recording. He’ll perform with a full band, featuring the musicians who contributed to the recording process.

Well, the album has arrived! It was with much trepidation that I put it into the player… I’m imagining everything that could have gone wrong… Is it going to be blank? Is it going to play? I am excited and relieved to say that it works! It’s a weird feeling actually, to at the end of the whole process be sitting here with a plain brown cardboard box of CDs. Now what?

I’ll have them available at the Mike Vial & Mike Gentry Release Party at the Ark next Tuesday night, and you’ll be able to order them on my Bandcamp page. 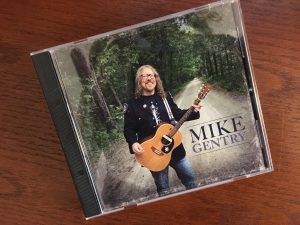